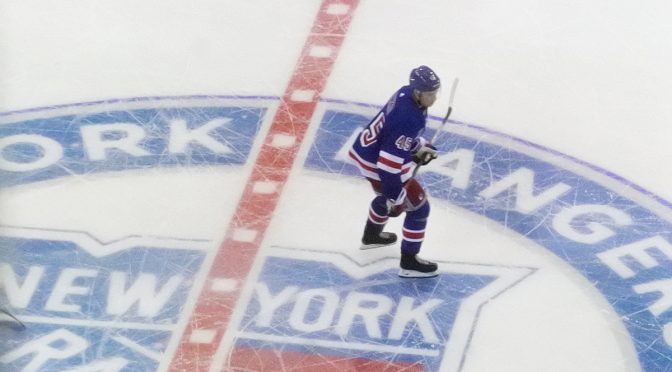 The NHL season 2019-2020 is on pause, so now is a good time as any to have a look at New York Rangers rookie Kaapo Kakko’s first campaign in the world’s best hockey league.

As far as media exposure is concerned, Patrik Laine of the Winnipeg Jets may still be the hottest hockey commodity from Finland, but Kakko isn’t far behind.

Koivu and Kakko both come from the west-coast city of Turku and have their roots in the local club TPS. But as for experience, they’re day and night. Koivu played his 1,000th NHL game this season.

”Passion for hockey oozes out of him,” Koivu says of Kakko. “Humble may not be the right word when discussing Kaapo, but he’s humble in a good way.”

“When you’re young you’re not always patient. I just hope Kaapo remains so, and all pieces will fall into place. He has a great future ahead. I’m so happy for Kaapo, one reason being we’re from the same city! This is great for Finnish hockey and great for the TPS community. People need idols like him.”

Aho, the top-line center, didn’t play well when the Hurricanes visited Madison Square Garden just before Thanksgiving 2019. He had nice things to say about Kakko, though.

“Great to see yet another Finn become a top draft pick,” said Aho referring to Kakko’s No. 2 status. “New York expects a lot from him, and he’s shown he can play well. I’m always happy to see a fellow Finn succeed.”

”We weren’t often on the ice at the same time but every time we have played against the Rangers, he’s been real good.”

Like Mikko Koivu, Pekka Rinne has been around the block in the NHL. The Finnish netminder won the Vezina Trophy as the league’s best goalie in 2018.

”Kaapo is an excellent player,” said Rinne, at the risk of stating the obvious. “It’s no easy task coming to this league at age 18, yet he’s been able to get a good role on the team. He gets to play with a bunch of great guys and sees time on the power play as well. Nice to see another great Finn come to the NHL.”

Sabres blueliner Ristolainen, another TPS Turku product, is a few years older than Kakko but the two know each other well. Last fall, Kakko tried to beat Ristolainen in a one-on-one battle but couldn’t even produce a shot on goal.

“Whenever I play against other Finns, I make sure none of them gets past me. Otherwise there’s a long, hot summer ahead in Turku,” Ristolainen said with a smirk.

All joking aside, the defenseman respects the up-and-comer. “I’ve seen him play with TPS and we’ve participated in summer skates in Turku, too. He’s a good player, he’s in good physical form. Surely, he’s a big part of the Rangers’ future.”

Markus Nutivaara, another Finnish defenseman with a sense of humor, played against Kakko in early 2020 – although he didn’t realize it himself. “I’m bad at spotting who I’m playing against!” Nutivaara chuckled.

But still: “Kaapo’s a strong kid, I’m sure he’s going to be great.”

On March 12, the NHL paused the season due to the coronavirus pandemic. Kakko had 10 goals and 23 points in 66 games.